Nomenclature: the problem of vernacular names 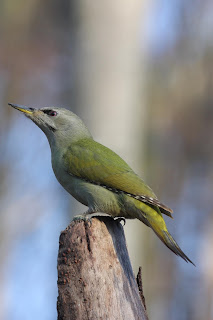 A universal agreement amongst ornithologists on which taxonomy to use in the classification of birds still eludes us. Furthermore, there is still disagreement on which English vernacular names to use and this is valid for the woodpeckers, too. This problem is partly due to the global diversity of the English language and a standardization of names does not seem to be on the horizon. Indeed, total conformity in English nomenclature is probably unrealistic. The solution for most when discussing the picids (to establish exactly which species is being discussed) is to refer to the scientific name of the species (often called the Latin name, though strictly speaking that is incorrect) as there is more (but not total) conformity in the use of scientific names. There are may examples of woodpeckers having more than one English name as even a brief perusal of the literature will reveal. For example, in India the Flamebacks are also often called "Goldenbacks". A particularly confusing example is "Grey-headed" versus "Grey-faced" Woodpecker. Most European literature, and the vast majority of ornithologists and birders, refer to the Eurasian Picus canus as Grey-headed Woodpecker, however the African species Dendropicos spodocephalus is also widely called Grey-headed Woodpecker (the IOC have named it Eastern Grey Woodpecker). Photo of Grey-faced Woodpecker, Austria, Thomas Hochebner.
Posted by Gerard Gorman at 07:26