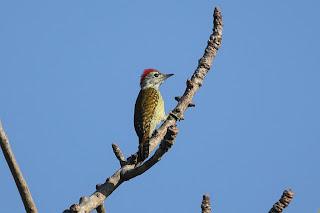 The Dendropicos genus comprises 15 small species that are all found in forests and woodlands in sub-Saharan Africa. All are basically green-coloured on the upper parts with pale underparts often barred. Sexual dimorphism is shown in plumage with males having red on the crown or nape which females lack. Some species, eg. Abysinian Woodpecker, Stierling's Woodpecker, Elliot's Woodpecker, have restricted ranges are are rather understudied. Photo: Male Cardinal Woodpecker Dendropicos fuscescens, Gambia, Vaughan Ashby.
Posted by Gerard Gorman at 07:21